Creating a Culture of Innovation to Get from ‘Care to Cure’ 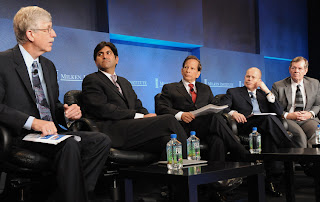 The future of our nation’s healthcare delivery system will be connected, coordinated, and data-driven, said a panelof health and science experts at the Milken Institute GlobalConference.

Michael Leavitt, founder and chairman, Leavitt Partners and former U.S. secretary of Health and Human Services, expects that the healthcare system will be better integrated and coordinated, with new care models featuring a merging of insurers, providers, and clinics. An important feature of the evolving healthcare delivery system is the creation of new payment models that are based on value and quality rather than on volume of services provided. In these models, “risk will be spread to those who are providing the care and not just to those who are paying for it,” said Leavitt. He added that there is a “new frontier for innovation – if a company has a new device, it will now be necessary to demonstrate in a rigorous way that the new innovation will bend the cost curve.”

“Medicine will be transformed into an information science,” said Aneesh Chopra, senior advisor of The Advisory Board Company and former assistant to the president and U.S. chief technology officer. “We’re going to be in a much more information-intensive market, and we need commensurate analytic horsepower.” Chopra said that, historically, health-related data have been inaccessible, but this is changing with an increasing number of healthcare providers now using electronic health records and a large chunk of Medicare data liberated by a provision of the Patient Protection and Affordable Care Act. He foresees the rapid growth of an “enablement industry” that will provide IT infrastructure for value-based care.

Another transformative factor, according to Steve Hemsley, CEO of UnitedHealth Group, is the impact of consumerism. “As incentives are provided for consumer participation, more informed and engaged patients will make better decisions; delivery systems begin to respond, making better choices, using resources more wisely, and controlling costs,” he said.

Francis Collins, director of the National Institutes of Health (NIH), described NIH’s role in the healthcare system. “NIH is in the business of generating evidence,” he said, and it is critical that we know which medical interventions work and which do not. NIH is collaborating with an array of partners on a nimble research infrastructure. In the current system, we set up infrastructure, run a study, close it all down, and start all over again. Collins envisions rapid observational trials in the real world that could change the way we prevent and manage disease – real-world analysis at sustainable cost.
The panel agreed that there are challenges associated with bringing innovation to the healthcare delivery system. Moderator Richard Merkin, CEO and founder of the Heritage Provider Network and a FasterCures board member, pointed out that doctors often find electronic health records cumbersome. Chopra countered that it is unfair to impose the electronic health record approach onto an old system that was not designed for it. New systems will provide new workflow and new support services – combinations of capabilities – “a mosaic of multiple systems packaged in a way doctors and hospitals want,” he said.

Merkin commented that sometimes with innovative new interventions, for example laparoscopic surgery, cost per unit decreases, but the number of units increases, leading to an overall cost increase. We need specific examples of innovations that reduce costs, Collins said. He described a new prognostic test for breast cancer that scores a tumor sample on 21 genes. “This test saved our healthcare system $100 million this year,” he said.

Hemsley shared his observation that the integration of a new device or treatment method into the accepted practices of an established healthcare delivery organization takes time and costs money. Merkin added that it takes 17 years before a medical innovation becomes standard practice: “We have a culture of avoiding mistakes, not a culture of innovation.”
at 2:42 PM