Be Bold: Medical Advances within Our Grasp 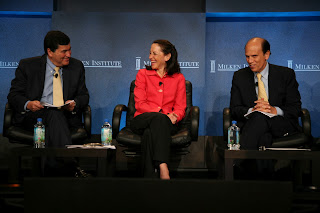 Kicking off the 2012 Milken Institute Global Conference this year was a panel discussion among some of the most senior leaders of U.S. biomedical research about the need for a new way of doing business to take advantage of today’s scientific opportunities. Moderator Michael Milken reminded the audience that the key driver of global economic growth in the last 200 years has been advances in medical science, powering the human capital that is the key ingredient for economic success.

National Institutes of Health (NIH) Director Francis Collins highlighted how much we have left to learn, noting that while we have insight into the causes of 4,000 diseases, we only have treatments for a little more than 200 of them. The number of FDA-approved products per billion dollars invested has been on an inexorable decline, which has been referred to as “Eroom’s Law,” or “Moore’s Law” in reverse. He laid out a number of efforts the NIH is undertaking to help overcome challenges in translating basic science discoveries into treatments, such as helping industry validate targets, building a biochip to screen for drugs’ safety and efficacy early, and “opening up pharma’s drug freezers” to rescue and repurpose abandoned compounds.

Margaret Hamburg, commissioner of the Food and Drug Administration (FDA), gave the audience a window into the scope and importance of FDA’s work, regulating 25 percent of every dollar consumers spend in the U.S., on a budget that amounts to $8.50 per year per taxpayer. While safety is FDA’s top priority, Hamburg recognized that the agency needs to be “an integrated component of what’s being done. We have to be open and transparent, make processes more predictable, streamline and modernize regulatory pathways, and engage as deeply as possible on the science. What some interpret as the ‘foibles’ of the FDA often represent scientific uncertainty.”

Elias Zerhouni, president of global research & development at Sanofi and a former NIH director, brought a sense of urgency about the challenges the medical research enterprise is facing, saying it will require multi-disciplinary efforts fueled by honest brokers who can help reduce the transaction costs of bringing stakeholders together. He boiled the challenges down to three:
Freda Lewis-Hall, executive vice president and chief medical officer at Pfizer, also had three challenges to bring to the table:
Lewis-Hall noted that many of the issues facing medical research – such as intellectual property, privacy, and collaboration – are not unique and have been addressed by other industries from which we need to learn.

Milken showed a favorite political cartoon by Benjamin Franklin, a snake cut into pieces labeled “Join or Die.” He likened it to the disjunction in medical research that threatens the enterprise.

Collins made an impassioned plea to maintain the resources needed to drive this engine, that at this time of significant scientific opportunity “we should be bold. We have the opportunity to understand Alzheimer’s, to change the way we approach cancer, to do something about the obesity epidemic, for an AIDS-free generation, a universal influenza vaccine. These things are within our grasp. We can’t let these opportunities slip away.”
at 11:16 AM