US Faster than Europe When It Comes to Approving Cancer Drugs

Adam Clark, Ph.D., Director of Federal and Scientific Affairs, FasterCures
In the world of drug development, there may be a tendency to believe the grass is always greener on the other side of the fence – or in the case of U.S. Food and Drug Administration, on the other side of the pond. Recent Congressional hearings have heard testimony on the slow pace of FDA approval of medical devices in the US compared to Europe.

A new study challenges these preconceptions and offers evidence that the FDA is in fact more efficient than its European counterpart in reviewing and approving new drug applications to bring new oncology drugs to market.

An analysis conducted by Friends of Cancer Research published in Health Affairs compared the review times of oncology drugs submitted to the FDA and the European Medicines Agency (EMA) between 2003 and 2010. The study showed that oncology drugs applications in the US were approved at approximately six months, while oncology drugs in Europe took nearly a year. In addition, this same study found that the FDA approved 32 oncology drugs over this time period compared to 26 by EMA.

Unfortunately for regulatory agencies like the FDA, it only makes headlines when something goes awry – safety alerts, food recalls, warning labels, and so forth. And headlines tend to shape public opinion, and in turn, could ultimately influence public policy. But the reality of the FDA’s task at-hand, regulating 25% of every consumer dollar is a tall order for any one agency. But there is no backstop, no other agency, that performs its critical work.

FasterCures is a member of the Alliance for a Stronger FDA, a broad-based coalition focused on ensuring Congress adequately funds FDA's essential missions. We need a strong and robust FDA to protect public health and safety and ensure the U.S. continues to pave the path to medical progress – and be able to apply lessons learned from cancer drug approvals across all other diseases.

What Have We Learned from HIV/AIDS Activism? The Basics Make All the Difference

Margaret Anderson, Executive Director, FasterCuresWhat a privilege it was to lead a discussion with esteemed leaders and officials in the HIV/AIDS advocacy space about our new paper Back to Basics: HIV/AIDS Advocacy as a Model for Catalyzing Change. The paper, authored by FasterCures and HCM Strategists, was intended to distill lessons learned from the HIV/AIDS model so we could examine if they can be replicated to address today’s medical research advocacy challenges. Five elements of the model rose to the top: attention; knowledge & solutions; community; accountability; and leadership. Thursday’s forum delved into each of these elements, and reminded us that while challenging the system is a Herculean task, even under the most difficult circumstances, it is absolutely possible to achieve change. 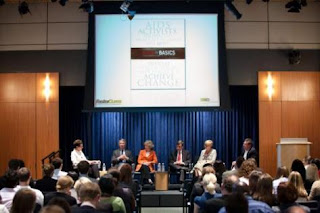 in his opening, “If it weren’t for the leaders of this movement, I wouldn’t be standing here today.” I pointed out how personal this issue is for so many, and how many people who have died from HIV/AIDS paved the way. But, as Manganiello offered, “We don't question status quo anymore. We should not accept that the system is unchangeable.”

HIV/AIDS activists were successful in turning a cause into a movement because they were organized and knowledgeable about the issues, not just loud. It started with fear and anger, which led to theater, which led to getting smart on the science – and it was that combination of factors that was absolutely key. Getting to the table does not equal getting attention. We asked whether advocates today are lulled into a sense of complacency by sheer virtue of the fact that we are “invited in”. Are advocates part of a box that gets checked instead of a voice that gets heard?
We need to stop accepting that the system is what it is and focus on what it should be. Maureen Byrnes who was executive director of the National Commission on AIDS, had two important messages for all advocates today, “Be specific, and don’t wait to be invited.” Brenda Lein who was a member of ACT UP and worked with Martin Delaney at Project Inform said, “Getting angry isn't enough. That's where it starts, but then you need to understand process and be open to solutions.” She has since worked with other disease populations including breast and prostate cancer to help share the lessons learned.

Patients, not just patient groups or scientific representatives, must be at the center of advocacy efforts – and they need to invest time and energy into understanding the scientific, policy, and regulatory issues and how to address them. Byrnes asserted, “Success is not just asking for change, but understanding the system and thinking about what a solution looks like.” This report offers up an opportunity for all disease advocates to figure out how to apply this to their community.

So, what was the advice for today’s advocacy? Dr. Tony Fauci, director of the National Institute of Allergy and Infectious Diseases asserted “If you really want to shake cages you have to be persistent. This is very different than coming out for a meeting once a year. We knew [the HIV/AIDS activists] weren't going away.” Dr. Jim Curran who ran the HIV/AIDS Division at the Centers for Disease Control and Prevention and is now Dean at the Rollins School of Public Health said “As an activist, you have to have a certain amount of threat you bring to a meeting.”

I think what struck me most during this discussion was the shared insight that both Fauci and Curran offered: activism is NOT personal. Whether it was the 20,000 postcards with unfriendly images being delivered to your home, or full-page NYT ads saying you were an idiot, or relentless noisemaking and disruption at meetings, they both spoke over and over about how “they aren’t just numbers, they are people.” Leadership was one of the elements of the model we offered in the paper, and I think those who have worked with these officials, have benefited from their tireless commitment to getting things done, or have heard them speak can say they embody just what you want and need in a leader. 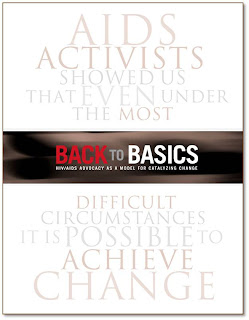 So, I urge everyone to read this report, and analyze how you can apply the elements that defined HIV/AIDS activism to advance your solutions. They’re basic but it’s a roadmap for how to achieve meaningful change. As Larry Kramer, founder of ACT UP said in our interview with him, “You always have to be in charge, and you have to be on top of it, and you have to not give up. It is never ending, and it is day after day after day after day, and it’s exhausting. And it really doesn’t work unless you realize that. It doesn’t’ work if you don’t do it every single day.”

Onward. Let’s get back to basics.
Relevant Links:

We noted with interest a post from Sally Rockey, NIH’s Deputy Director for Extramural Research, highlighting progress being made in the NIH Clinical Center’s effort to open its doors to greater use by the extramural research community. We are fans of the Clinical Center, the nation’s largest and most sophisticated research hospital, and have long advocated that its resources should be available to and used by researchers outside the NIH’s Intramural Research Program (IRP) in addition to the Intramural Research Program (IRP) researchers it has historically served.

In 2008, FasterCures convened a task force chaired by Nobel Laureate Dr. David Baltimore, which called for the IRP to adopt a new mission that is outcomes-focused, is capable of responding quickly to new opportunities and challenges, and fully utilizes its world-class research hospital and other infrastructure. Among the task force’s key recommendations was that the Clinical Center be fully utilized (at the time it rarely reached 60% occupancy), and that NIH create streamlined mechanisms by which extramural researchers and industry can more fully use the Clinical Center for projects in collaboration with the IRP.

In 2010 FasterCures and 86 other patient organizations sent a letter urging the NIH’s Scientific Management Review Board to open up the Clinical Center facilities to external researchers. As the nation’s research crown jewel, it has the potential to excel in research efforts focused on rare and orphan diseases and on pre-clinical and methods research essential to building tools, platforms, and protocols for the entire clinical research enterprise.

We are very pleased to see that NIH continues to move forward with this important effort. We urge all stakeholders – patient groups, academic researchers, and industry alike – to take Dr. Rockey up on her offer “to provide input on your interest in accessing the NIH Clinical Center resources.” If they build it, will you come?

Speeding the pace of medical research by strengthening the connections between the people who can make it happen is what FasterCures all is about. We look for big ideas in small spaces and encourage financial and strategic risk-taking to turn discoveries in the lab into cures for disease. Among our greatest privileges has been our work with and development of The Research Acceleration and Innovation Network (TRAIN) program, a new class of medical foundations known as “venture philanthropies” – organizations of a philanthropic nature that operate in venture-capital mode – which are bringing a sense of urgency to the rest of the medical research community. By measuring the effectiveness and efficiency of a medical charity’s scientific outcomes, dollars can better be directed to projects and organizations making the greatest progress.

This model of cure entrepreneurship has begun to take root across diseases and sectors, and both TIME magazine and The Chronicle of Philanthropy have recently taken notice.

This week’s TIME magazine features the article “Check Your Charity!” about the lack of market discipline in the medical philanthropy space and the push to better measure and compete on scientific outcomes. The piece highlights organizations that are applying a results-oriented approach to their work, like the Multiple Myeloma Research Foundation (MMRF), Accelerate Brain Cancer Cure, and the Melanoma Research Alliance – all part of the FasterCures TRAIN program. “Critically, FasterCures has sought to link these evolving groups . . . . It's trying to spread best practices across a host of health care groups, a break from the past in which researchers and organizations shielded their work to protect their grant money and intellectual property.”

A recent Chronicle of Philanthropy article calls out other TRAIN members such as The Chordoma Foundation and the Cystic Fibrosis Foundation, for their innovative approaches to accelerating medical progress. The piece notes that “FasterCures amplifies the work of groups that have taken risks and been successful;” and that “by getting organizations and companies that are used to competing to instead work together, FasterCures hopes to break down walls that may slow the achievement of medical discoveries that could save lives.”

Check out the full articles here:

For more on TRAIN organizations, initiatives, and best practices go to TRAIN Central Station, the online portal for and from venture philanthropy in medical research.