Give me your innovators yearning to breathe free 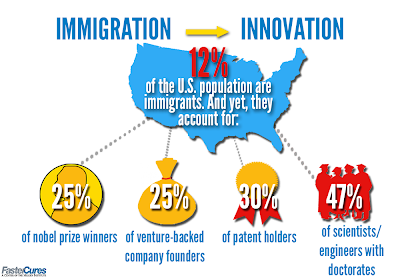 Ingenuity defines America. From sea to shining sea, the country bristles with innovation. Google, eBay, Intel, Tesla, Yahoo, SpaceX, LinkedIn, Flickr, Facebook, exemplify the indomitable American genius… or perhaps the indomitable genius of its immigrants, as all these companies were (co-) founded by foreign-born entrepreneurs.
This is no artifact. Economic geography shows that innovation thrives where cultures blend. It is true of countries built by immigrants, such as the United States, Australia, or Israel. It is also clear from the capitals of former European empires – Berlin, Vienna/Budapest, Paris, London – where the mingling of ethnicities created the ferment that transformed them into cosmopolitan beacons of artistic and technological power. Further back in history, Florence, Venice, Rome, Athens, Constantinople, and Alexandria have all at some point leveraged their positions on trading routes, or their dominion over faraway provinces, to create the cultures that gave us the Renaissance, Hellenism, and the Islamic golden age – when roving scholars from Cordoba to Bukhara made major contributions to medicine, mathematics, and astronomy.
Today, innovation continues to thrive where cultures overlap: Silicon Valley, Boston, Quebec, Singapore, the Baltic Rim, Switzerland, Flanders, and many other regions.  In the United States, the foreign-born represent 12% of the population, but they account for 25% of its Nobel prizes, 25% of the founders of venture-backed companies,30% of its patents , and 47% of its scientists and engineers with doctorate degrees. Immigrants are over-represented among members of the National Academy of Sciences and the National Academy of Engineering, and among the authors of highly-cited science and engineering journal articles.
It is as if innovation somehow comes more naturally to people who internalize various cultures. Research and casual observation actually support that idea. Polyglots know, for instance, that one does not think alike in various languages. A Frenchman does not think like a German. One is holistic, the other is methodical. These differences carry over to how we solve problems. Some cultures are analytic and reductionist, others are intuitive and associative. No single approach is better, but, depending upon the problem, some may be more appropriate. People steeped in multiple cultures can access a broader set of problem-solving pathways and pick one that best fits the situation at hand.
There are other reasons that put immigrants at an advantage when it comes to innovation. They are apt at challenging norms and authority, and prone to act when unhappy with their lot. With their accents and customs, they never quite fit in, and are used to being different and operating from the margin. They are also at ease with disruption, which is part and parcel of being an immigrant. Like entrepreneurs, they have a tolerance for risk, and a bias for action.  And they top that with a relentless drive to succeed because they can never be completely mainstream.
Research also shows that immigrants have an uncanny ability to function in multiple worlds at the same time. They often grow up speaking one language at home and a different one at school, and they sometimes must learn several languages as their parents change countries to flee war or persecution. Those who become scientists retain the agility to move back and forth between multiple domains. They are boundary crossers, with interest and expertise in multiple disciplines, but operating preferably at their interface. They are not biologists or chemists or physicists, they straddle the boundaries between these sciences, and can see connections that might elude less versatile scientists. This makes them especially effective problem-solvers. They think differently, can approach problems from various angles, and harness multiple problem-solving tools.
With such attributes, one would think that countries blessed with immigrants would see them as assets to be leveraged, not a ball and chain on the economy. Indeed, those that value them, such as Israel, are among the world’s most innovative societies.  But most nations see immigrants unfavorably, like welfare collectors, and relegate them to camps and ghettos. It does not help that many have a precarious immigration status – like temporary visas that get overstayed or no visa at all. But then, people who flee war and misery seldom have their papers in order. This makes much of the current US debate on immigrants – and whether they arrived legally – a bit disingenuous. We should do what best serves the interests of America, and not lose ourselves in legalistic arguments.  Immigration is like free-trade. It benefits a country, even if the other party does not play fair. Just as a nation gains from engaging in free-trade, even if its partners do not reciprocate, it also gains from welcoming immigrants, however they arrived. This is not a plea to lift all restrictions, but one to manage them wisely.
Immigrants build great nations, but as societies mature, they tend to lose their vitality. They become risk-averse while entrenched interests and bureaucracy combine to enshrine the status quo into complex regulations that deter change and innovation. America has aged better than most, due in no small part to the fact that it remains by far the top destination for the migrants of the world, taking in roughly 20% of its “huddled masses yearning to breathe free”. This has been America’s enduring success formula: a multicultural society constantly refreshed by a flux of immigrants that accomplish here what they could have never done elsewhere. Immigration has given us many of our leading scholars and entrepreneurs, and the technological advances that have shaped our society and the world. Let’s make it easier for immigrants to continue to help us remain in the vanguard of innovation. No one else will.


Visit us on our new blog: www.fastercures.tumblr.com
at 2:15 PM