By Cecilia Arradaza, Director, Communications and Policy, FasterCures
May 29, 2013
A few weeks ago, House Majority Leader Eric Cantor led a bipartisan group of members to the National Institutes of Health campus to learn more about their work, but also to discuss the future.  Reps. Earl Blumenauer (D-OR), Michael Burgess (R-TX), Renee Ellmers (R-NC), Eliot Engel (D-NY), Chaka Fattah (D-PA), Andy Harris (R-MD), Tim Murphy (R-PA), and Ted Yoho (R-FL) joined the Majority Leader.  Cheryl Jaeger, Megan Whittemore, and Matthew Zackon of Leader Cantor’s office and Karen Summar of Rep. Cathy McMorris Rodgers’s office also participated.
Seeing is believing – walking through the NIH Clinical Center, the crown jewel of our nation’s research framework, provides you not only with hope for the future but a real sense of optimism that science matters and that it can make a difference in our lifetime. So to see our Members of Congress carve out time to visit the NIH provides the medical research advocacy community with great hope we can reaffirm our commitment to the biosciences. 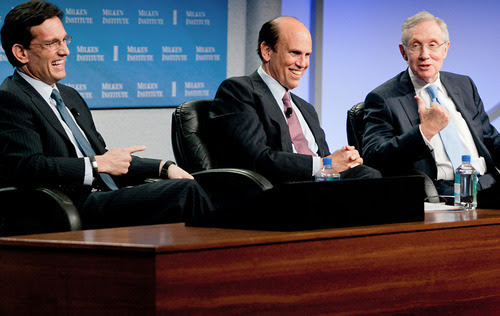 At the Milken Institute Global Conference, on a panel with Senate Majority Leader Harry Reid and FasterCures founder Michael Milken, Leader Cantor said that “[we] believe that science should be a priority.” He added that he “hopes when [the Congress] gets to the point where there are issues that seem insurmountable, let’s go ahead and try and practice doing things together so that we can get some things done.”
He then cited the creation of the National Center for Advancing Translational Sciences (NCATS), as one of the demonstrable results of him working closely with Leader Reid. “Harry, when you and I did NCATS, it was a great example I think of the ways that we can work together without a lot of fanfare and just practicing and putting points on the board, and maybe we can work our way towards larger goals after that.”
Cantor then alluded to the May 9th bipartisan trip to the NIH that he was organizing. “Not only will we spend a couple hours together one afternoon in Washington, but also perhaps learn something together we can practice trying to solve problems together,” he said.
During the panel discussion, Leader Reid concurred with Cantor’s statement on the critical importance of supporting science and noted that “if we’re going to make progress in some of the dreaded diseases we have, we have to step up as a federal government to do that. It’s going to take us working together to fund these programs so that our great scientists can continue doing what they know needs to be done. And we can’t do it on the cheap.”
Investing in our nation’s medical research infrastructure is an investment in our future.
From a dollars-and-cents vantage point, consider the economic payoff of the Human Genome Project: the U.S. government’s $4 billion investment in the Human Genome Project spurred an estimated $796 billion in economic growth from 2000-2010—a 141-fold return on investment, after adjusting for inflation.
And, we are living longer, more productive lives, due in large part to research advances that started at the NIH. For example, U.S. death rates from heart disease and stroke have fallen more than 60% in the last half-century.
The case for investing in science and medical research is clear. To punctuate this point, let’s turn to the cost of inaction. Well –
Point punctuated.
Now to further underscore, consider the global environment we’re in. At a time when other countries are doubling down on their biomedical research spending, the U.S. is cutting our investment (figure 1) in the industry that promises more jobs, greater productivity, and lives saved.
With all these compelling arguments to back us up, let’s remind our elected officials of what’s at stake, and get them to act on making medical research a national priority.
Related links:

FasterCures congratulates Marilyn Tavenner for her confirmation as administrator of the Centers for Medicare and Medicaid Services (CMS), an $820 billion agency that oversees the bulk of federal healthcare spending and healthcare reform.
Tavenner is the first confirmed administrator for the agency in more than six years, backed by an overwhelming 91-7 vote in the Senate. Such demonstration of bipartisan support underscores the importance of having strong and sustained leadership of an agency that plays a vital role in determining the fate of the U.S. healthcare infrastructure.
CMS oversees Medicare, Medicaid, children’s health insurance, and implementation of many of the provisions of the Affordable Care Act. Decisions made by CMS impact not only the way we reimburse for costs associated with healthcare delivery, in so many ways, these decisions also determine what therapies patients can access today, and what therapies might move down the path from the laboratory bench to the patient’s bedside.
And that’s why at FasterCures, we’re particularly paying close attention to the role CMS and other payers could and should play in advancing innovation in research and development. We continue to work closely with all sectors of the medical research ecosystem to explore effective ways to engage payers into the R&D process whether it is through a discussion of what data sets are relevant to reimbursement decisions, or a broader conversation about the role that reimbursement will play on decisionmaking at biopharm companies as they decide therapeutic discovery pathways.
Tavenner has a long to-do list ahead and we commend her commitment to strengthening the agency to improve health outcomes for patients, make our health care delivery system more effective and efficient, and ensure the best possible therapies can be made available to the right patients at the exact time they need it.
We stand at the ready, Administrator Tavenner, to support you and CMS.
at 4:10 PM No comments:

Make sure to bookmark FasterCures’ new tumblr for more 2013 Global Conference posts and to keep on the pulse of the latest innovations in the medical research ecosystem.