Earlier this month, the Food and Drug Administration (FDA) launched its “Innovation Initiative,” a new program intended to accelerate and reduce the cost of development and regulatory evaluation of innovative new medical devices submitted to the FDA.

This initiative seeks to advance efforts like the Defense Advanced Research Project Agency (DARPA)-funded project that created a brain-controlled prosthetic arm that restored near-natural hand activity through neural impulses. This was made possible by an innovative device, a microchip implanted on the brain. And FDA wants to see more of these ideas coming down the regulatory path.

Medical devices include everything from glucose tests and pacemakers to x-ray and laser equipment. As we turn to next generation devices that include nanotechnologies or novel imaging tools, we stand to improve early and accurate detection of disease and tailor treatment to each individual, a key element of 21st century personalized medicine. However, these technologies will also require special expertise to review and evaluate their ability to improve health.

Recent analyses in the past couple of months – notably AdvaMed’s assessment on medical device approvals, and PwC’s Medical Technology Innovation Scorecard – underscore the need for medical device review and approval processes to be up to par with the innovations that are coming down the pipeline. The hope is that through this initiative the FDA will be able to stay ahead of the curve and have the capacity needed to meet the new regulatory demands of novel medical and technological advances.

Often, innovation pushes the barriers of regulation by disrupting how a system works. This new proposal tries to strike the delicate balance of allowing FDA to fulfill its mission of ensuring new products are safe and effective, while encouraging revolutionary ideas to come to fruition.

As part of the initiative, the FDA proposes to establish a Center Science Council to prioritize projects to be considered. The agency would also like to establish third-party certification centers that could facilitate the review of new products to accelerate their submission to FDA. And proposes to build a Network of Experts – distinguished leaders in new technologies – to provide guidance to the FDA on scientific and technical issues related to a new product.

Earlier this year, President Obama declared his administration’s efforts to move towards a 21st century regulatory infrastructure. In order to do so, he emphasized that agencies like the FDA will need to pursue new models of review and regulation that take into account the state of our best science and technology and ensure these make it to the marketplace.

At FasterCures, we believe there’s great potential for the Innovation Initiative to fast-track truly effective and efficient medical devices so that they may be fully utilized by patients who need them most. It’s an alternative approach to the usual process and will be a program to track. We look forward to seeing this effort unfold.
at 12:30 PM No comments:

About a month ago, personal travel brought me to Southeast Asia and I took the opportunity to see first-hand what many of us in the U.S. medical research community hear about as synonymous with innovation and transformation: Singapore’s Biopolis. Did it live up to the hype? Yes, at least at face value. Some observations: 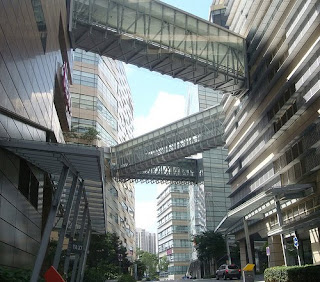 Biopolis was built 10 years ago when Singapore focused its attention on building the “knowledge and innovation” industry. Singapore’s “lack of legacy,” as Liu pointed out, has allowed it to build a system from the ground up. So, what can the U.S. medical research system, a more mature, and complex enterprise that is constantly evolving to meet the demands of our time, take from all this? Can dinosaurs learn something from a bird just learning to flap its wings?


A 2009 study by the Information Technology and Innovation Foundation, "The Atlantic Century," found that the United States has made the least progress of the 40 nations/regions (with a global competitiveness score of 63.9 that’s 15 percent below the leader Singapore’s score of 73.4). We can watch Biopolis and Fusionopolis grow and prosper, from a distance, and wrap it up neatly with a case study bow. Or, better yet, we can and should get to know this model better and see what we must take away from it - embrace the transformation that’s underway and innovate from the outside in. We can identify approaches that we could potentially scale and replicate. We can infuse our paradigm with the culture of collaboration that they’ve demonstrated could work.


The U.S. has much to offer. Among the many sage lessons we can impart to our global counterparts for example, is focusing on, leveraging, and optimizing the power of the patient. Smart, strategic patient advocacy and engagement has paved the way for transformative advances in medical research. Just turn to how venture philanthropic organizations have catalyzed innovative approaches.


Disease knows no boundaries. And neither should the search for cures at the most lofty level or even at the most basic systems enhancement step. When nations compete to innovate in biomedical sciences – whether it’s to improve public health or increase public wealth – patients benefit. As FasterCures Chairman Mike Milken wrote in the Wall Street Journal, “America's economy used to be the sun – the gravitational center – in the "solar system" of leading nations. In the future, we'll no longer be the sun. But by investing in our own health, we can help solidify our position as Jupiter, the largest planet.”
at 8:42 AM No comments:

More than 650 participants tuned in to a Webinar on March 16 hosted by FasterCures with National Institutes of Health Director Francis Collins, who gave the latest updates on the progress on the proposed National Center for Advancing Translational Sciences (NCATS), answered questions, and sought to dispel myths about this effort. Participants were from 38 states and represented all medical research sectors – more than 229 patient advocates from 100 different organizations, nearly 200 academics from 78 research institutions, 62 from biotechnology and pharmaceutical companies, 82 from various government agencies, and dozens of other stakeholders from the venture capital community to policy influencers.

Calling NCATS “a disruptive innovation, in a good way,” Collins said the motivation for the new Center is “the need to view the drug development pipeline as a scientific problem, ripe for experimentation and process engineering.” He noted that now is the time to act as opportunities for new drug targets to be tackled successfully have been growing well beyond capacity of the private sector to take on by itself and that the appetite for public-private partnerships is high. Engaging in translational research is not new for NIH, he said. A 2010 survey showed 550 translational research projects going on at NIH, 65% preclinical and 35% clinical, and a recent New England Journal of Medicine article reported that 153 new therapies have been discovered through research carried out in public-sector research institutes, most of which have been supported by NIH.

But he also acknowledged that the productivity of the medical research system overall is declining, and stated his belief that NIH – by facilitating and supporting partnerships, providing resources, and enhancing training – has an increasingly important role to play in moving the results of promising research it funds down the pathway toward new treatments. “The opportunity for new targets is growing well beyond industry’s ability to address them all. … In addition to neglected diseases, for many common diseases there are ‘neglected targets,’” which NCATS can help de-risk and make attractive for investment. He also believes that NCATS could be “quite catalytic” in helping repurpose abandoned compounds, and mentioned that NIH will be holding a meeting with biotech and pharmaceutical executives in April to discuss such ideas.

Collins was emphatic that NCATS is intended to complement, not compete with, the private sector. “We are not turning NIH into a drug development company,” he said, contrary to some headlines that the initiative has generated. He also took care to say that there is no intent to take focus and resources from NIH’s basic science mission and programs. As a matter of fact, he believes NIH’s investment in translation can empower basic research.

FasterCures executive director Margaret Anderson moderated this virtual meeting, noting that NIH’s effort to make translational research a priority is significant and meaningful for the thousands of patients with a deadly and debilitating disease for which there are no viable treatments or cures. Especially when you consider industry’s estimate that for every 5,000 compounds tested, only five make it to clinical trials, and only one is ever approved by the Food and Drug Administration (FDA). Patients are anxious for – and deserve – better returns on our nation’s research investment.

Collins appealed for all research stakeholders to be reasonable about expectations for this new effort, saying that NCATS should not be judged by the number of drugs ultimately approved. He ended by saying, “This is science, so there will be surprises along the way. But there is an opportunity to do something historic here.”

NIH is actively seeking feedback on the proposed structure and functions of NCATS at a new Website. An archive of the FasterCures Webinar is available for viewing.
at 12:49 PM No comments:

A new white paper released this week by the Alliance for a Stronger FDA says that a robust FDA is essential to continued growth of the U.S. economy. “The U.S. Food and Drug Administration: A Cornerstone of America’s Economic Future” details how the FDA creates jobs, saves and improves lives, secures a safe food supply, and protects society from terrorist threats and infectious diseases.

“No agency with a critical role like FDA’s should be asked to do more, with less,” said Margaret Anderson, vice president of the Alliance and executive director of FasterCures. “If we are to advance medical progress and improve patients’ lives—which will significantly bolster the US economy—we need to start making the FDA a national priority.”

The FDA already plays an important, tangible role in Americans’ lives and the U.S. economy – FDA-regulated industries account for 25 percent of U.S. consumer spending, from cell phones to toothpaste. Consider that the bioscience industry, which depends on FDA for regulation of its products, directly employed 1.42 million people in the United States in 2008 and generated an additional 8 million related jobs.

Additionally, consider how medical breakthroughs that go through FDA’s rigorous regulatory process can improve patient outcomes and have a positive economic impact. For example, the Alzheimer’s Association has determined that a breakthrough that delays the onset of Alzheimer’s disease by five years would mean 1.6 million fewer Americans would have Alzheimer’s, and the United States could save $50 billion per year in medical costs within five years of the approval of such a product.

At FasterCures, we have long advocated for an FDA fully equipped with the resources and expertise it needs to keep pace with the changing research technology and to apply 21st Century scientific principles to regulatory practices and policies. With appropriate resources, the FDA can help drive innovation, catalyze the economy, and serve the public health needs of the American people.
at 5:07 PM No comments: