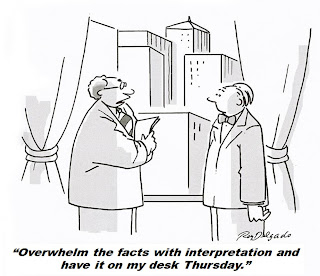 “Facts are stubborn things,” was a saying that originated in the defense of the British soldiers at the Boston Massacre trial, meaning facts are facts and can’t be disputed.  But facts can also be stubbornly difficult to interpret sometimes.

A new National Venture Capital Association survey was released last week, reporting that venture capital invested in biotech was up in 2011 by 22% from 2010, but that first-round funding was at its lowest level in 15 years, with only 153 drug and device companies getting seeded.

But as the folks at InVivo blog reported, the other major source for data on venture investment, DowJones VentureWire, also released its year-end totals and came to slightly different conclusions: Total biotech funding rose by only 11% -- all of it on the device side.  And InVivo’s own data on early-stage financing showed that slightly more companies received Series A financing in 2011 than in 2010, giving them a more positive spin on 2011.

Bruce Booth with VC Atlas Ventures took the media to task for making positive data into a negative story.  He looked at the NVCA’s own data (though through a slightly different lens) and came to some different conclusions as well:
So whose facts are the right ones, and whose interpretation of the facts is correct?  What metrics are most important here – the total amount of funding that went to early-stage biotechs, or the number of companies that got funded?  Are bigger individual deals a sign that small, innovative companies are out of luck, or a reflection of a realization that the longer time horizons for a return in life sciences might require bigger up-front investments?  What timeframes are most important – trends over the last 12 months or over the last 12 years?

And what on earth does any of this mean for patients hoping these companies hold the key to the treatments they’re waiting for?  Perhaps it’s less about the total amounts of money that are flowing into the system and more about how to make sure the right kind of money (venture, government, foundation) is lined up at the right time for the right ideas so inventors and companies aren’t wasting time “circling the airport” looking for the next infusion of cash.

Do we need some new models or infrastructure to try to make financing more efficient?
at 11:31 AM No comments:

Email ThisBlogThis!Share to TwitterShare to FacebookShare to Pinterest
Labels: Biotechnology

Who decided that “top 10” lists should have 10 things on them?

For five years now FasterCures has been producing its “Top 10” list of medical research trends to watch in the coming year. And every year we have to go through the painful process of deciding what to leave on the cutting room floor.

We relish the opportunity to tell people about some of the interesting trends, ideas, initiatives, events, and people that we think are worthy of attention in the 12 months ahead. But there is more that we’re thinking about, of course. The Top 10 list tends to be focused on things that we think are likely to be the subject of action or debate over the coming year, but there remain big, critical issues that span across years for all of us to focus on and work on together.

We’re concerned about the financial sustainability of the whole research enterprise. We’re hearing that venture capital is fleeing from life sciences, and those who are sticking around are investing in less risky opportunities. We’ll be fortunate if government funding remains flat – we’re not predicting any big increases in the current fiscal environment. So if more money isn’t likely to be pouring into the system anytime soon, what new sources of funding are out there, and what new financial models might be applied? Could constrained resources be an impetus for greater focus and efficiency in the research process?

We’re interested in what appears to be an increasing openness on the part of big pharma to the need for new business models of their own, not just doing things better the same old way. They’re groping their way toward it – embracing more truly “open innovation,” more pre-competitive collaboration, new ways of interacting with academia, working more closely with patient groups – but the pressure is on to “evolve or die.”

Supporting and improving the FDA will continue to be a major focus for us. We’d like to see FDA be able to better leverage NIH’s research capacity to improve its ability to evaluate the new science coming down the pipeline. We’d like to see the Reagan-Udall Foundation established on firm footing so it can become the kind of resource that the Foundation for the NIH has become for the NIH. We’d like to see more patient-driven research foundations engaging in a conversation with FDA about patients’ needs and priorities. And we’ll be doing our best to ensure a productive public dialogue about the role and record of FDA; a “blame game” doesn’t serve any of us well.

As if our mission weren’t ambitious enough, we’re also considering how the states on either end of the medical R&D continuum – prevention/wellness and the delivery of care – fit in with our work to improve the system that discovers and develops treatments for disease. And we are considering what the impact of an increasingly global research enterprise, as well as global sources of capital, could have on the U.S. biomedical research system.

With so much work to be done, there is no time to waste!
at 3:01 PM No comments:

On Huffington Post: Top 10 Medical Research Trends to Watch in 2012

1. NCATS: Who moved my cheese?This year, the National Institutes of Health will establish its new National Center for Advancing Translational Sciences (NCATS), created to speed the translation of basic discoveries into therapies that will improve public health. In light of our current fiscal reality (and limitations), we breathed a sigh of relief to see it up and prioritized in the appropriations process. Solutions can be tough to develop, and tougher to implement. How will NIH translate its translational focus to its cadre of basic research-focused scientists? Will NCATS strengthen and streamline existing efforts at the 26 other institutes and centers? Will it help to move discoveries out of the lab and to patients more quickly? NCATS is one way to get moving (and, as we know, "movement in a new direction helps you find new cheese"). The stakes are high with more than 100 million patients waiting for meaningful treatments options. But with Dr. Francis Collins as the visionary behind this effort, the same man who defied expectations by completing the Human Genome Project ahead of schedule and under budget, we like the odds.

For more by Margaret Anderson, click here.
at 6:31 AM No comments:

Business Is from Mars, Academia Is from Venus

Universities are showing increasing interest in stretching their work into the "Valley of Death" to move their discoveries towards treatments. Companies are rethinking their alliances with universities as sources of innovation to fill their pipelines, beyond traditional sponsored research agreements. At the Partnering for Cures meeting in November, experts discussed where such rethinking is taking place, the replicability and scalability of these models, and the challenges of this new type of relationship.


Moderator Ross DeVol, Milken Institute, noted that innovation is increasingly shifting to universities and, with that, new thinking and practices are developing to ensure that these efforts advance outcomes without distorting academia's core mission.

Annette Kleiser, University of Southern California Stevens Institute for Innovation explained that "making innovations, or I should say inventions, available to the public has become a critical part of what we do."

Pfizer's Tony Coyle pointed out that the wealth of academic understanding and expertise cannot be kept siloed in the usual few organizations. The divide between basic science and clinical practice is where we should be focusing, he pointed out, with the patient's needs always at the center. Coyle suggested industry look to its colleagues in academia to help reflect on what the true unmet medical needs are, and what opportunities exist to design therapeutics that are fundamentally different from the existing standard of care. "We don't need to be so insular," he said. "Success in medicine or chemistry alone will not allow us to develop new therapeutics that are truly meaningful and will have an impact on patients."

Stephen Friend, Sage Bionetworks, who professed himself a "galactic traveler" - having spent a third of his career in Venus/academia, another in Mars/industry and the last "on Earth with the patient" - talked about the need for new models to support all of the data and information that is starting to flow. The linear drug development pipeline is no longer, he said, and industry is "quite awake" to the fact that the old models aren't going to work.

Kleiser described why academia needs private industry: "We need the insight from the industry on how to turn these discoveries into a product. We need the exchange of data, and we need this exchange of expertise." She went on to give an example of a partnership USC has entered into with Johnson & Johnson and how the flexible nature of their IP agreement has opened up new pathways for innovation.

Fernando Kreutz, FK-Biotec, discussed his perspective on Brazil as a blank slate for medical research. "Innovation requires industry," he said. "In Brazil most of the science is actually done inside of universities. How can we channel all of this knowledge into innovation? That's the biggest challenge in Brazil right now."

Todd Sherer, The Michael J. Fox Foundation for Parkinson's Research, talked about what patients could do to help improve outcomes and ensure that development partnerships remain focused on meeting the needs of people with disease. "We do see the model changing in terms of understanding that one entity cannot solve all these diseases." While there is an openness for these collaborations, there are also competing goals and reward structures between industry and academia. Patient organizations can provide a neutral "playing field," allowing partners to come together in a safe space without the complications of either side having a home-field advantage.

Friend then talked about the power of data, and, in particular, the power of patient ownership of data when it comes to sharing and generating information for research. He highlighted several of Sage's projects including The Clinical Trial Comparator Arm Project, a precompetitive disease biology initiative, which is working to push comparator arm data of clinical trials in a variety of therapeutic areas into the public domain .

Recently, Pfizer and the University of California San Francisco began a revolutionary partnership which Coyle discussed. Aimed at more rapidly moving new therapies into human clinical trials, teams from the University and Pfizer work together on experimental therapies developed by the UCSF scientists with a goal of testing them in people with five hard-to-treat, often deadly conditions, including lung and prostate cancer."This is not collaboration from afar, but an example of working together with people that are striving for the same thing. Physically being located in the same lab starts trust, and builds this new ecosystem relationship. Academia cannot do it on its own, and the same goes for pharmaceutical companies."

In closing the panelists discussed the one thing they would change in the current environment. Kruetz said, "The one thing I would change is the lack of urgency in academia. It is shocking." Friend made the point that the scientist, the academic institution and industry work pretty well together. It is the patients that are missing. "Until earth joins Mars and Venus, it's not going to work."
at 1:32 PM No comments: