Healthcare Reform: Once More Into the Breach

The third day of the Milken Institute Global Conference featured a panel that discussed healthcare reform, an issue that continues to gain steam as the new Administration juggles priorities and attempts to present workable solutions to a health system that many contend to be broken.

Each panelist represented distinct sectors within the healthcare industry – insurance, pharmaceutical, advocacy, and patient groups – each sector with its own agenda and unique perspective on the best solution. And yet, as FasterCures COO Margaret Anderson, panel moderator, dug deeper beneath the surface with provocative questions, a common thread quickly emerged: all agreed on the need for universal coverage for the currently 46 million uninsured Americans, and for delivering better, more cost-effective care. 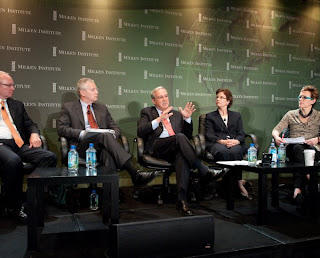 A simple Google search on “healthcare reform” netted hundreds of millions of results, with headlines that range from those that promise solutions, predict gloom, or examine the issue from a variety of angles, like the article titled: Healthcare Reform: The Good, The Bad and The Ugly.
With so many competing priorities and special interests surrounding the issue, Anderson asked the panel what’s different this time around to ensure our nation’s healthcare system sees sustainable reform.
Healthcare reform in contextThe panel discussed healthcare reform as part of a much broader set of social issues. Effective reform goes beyond the healthcare system and is shaped by what goes on in communities, schools, and the workplace. Panelists agree that for healthcare reform to be sustainable, prevention efforts, including initiatives to address chronic diseases; need to be factored as a solution as these are critical to curbing escalating healthcare costs that are directly impacting the nation’s bottom-line.

So, when will reform happen?
In an attempt to forecast change, Anderson asked the panel to opine on where they think we’ll be by year’s end. All four panelists believe a healthcare reform measure will pass – but that it will be far from perfect. They cautioned that reform will be incremental rather than sweeping, with various stakeholders making short-term concessions.

Thorpe said, “Stakes are very high. If it doesn’t work this time around, it will take another 15 years [to revisit reform].”

Indeed, with stakes this high, we don’t think anyone has the patience to wait another 15 years.

View the panel online.
Read the session summary.
at 11:12 AM